I'm so excited!!  I'm taking part in the Spring Surprise Swap 2010, organized by Heleen of Dutch colours http://dutch-colours.blogspot.com/ and Corry of Dutch bluehttp://dutch-blue.blogspot.com/.  I've just been partnered up with a buddy and we get to make each other a spring gift and pick and send each other some fresh spring fabric.  I feel like a kid getting a pen pal!!!  I'm so excited (I said that already didnt I??)

I normally just make things for myself, my kids or my sister, so they look great but are held together by duct tape or stapes in the back (only kidding), but seriously this is the first time I'm making something for someone else, so I'll have to be extra extra neat and tidy about it all...getting worried...

Last week I wasnt feeling well, and was mostly couch ridden, so I thought I'd start practicing my crafting skills.  Some months ago I had bought a great book on Amigurumi, called 'Amigurumi World' by Ana Paula Rimoli.   So, on Friday I started making the first project in it, and within a few hours I had this: 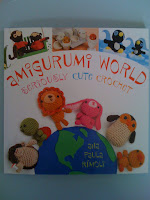 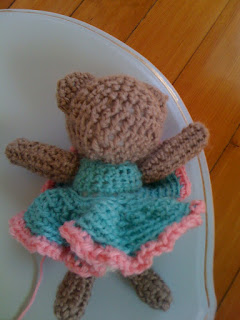 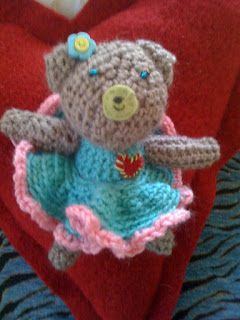 And she soon became this - Lovely Maxine!!!  She turned out so sweet that my sons both picked animals they want made, as did my twenty something daughter in San Fransisco and my niece!!  I had to go to shopping and get more yarn, as Maxine was made with the wool I'm reserving for the afgan I'm going to  make (after I finish the neverending one I've been working on for months) and it was too soft for this project. I dont like to use acrylic, but to be honest, the new yarn I bought was acrylic and the new toy I started is much tighter (better in this case).  Anyway...all I want to do is crochet cute animals now. This book should have come with a warning!  So if I decide to make one of these lovelies for my swap buddy, It'll look oh so professional (by which I mean no hidden duct tape or staples anywhere!!!).
Posted by Loretta Castorini at 2/01/2010