I'm probably just typing on and on without anyone out there reading...Oh well...

Anyway, it was late last night and I was tired so I didnt give to much info on the Udell-Hamilton house.  Did you watch that video?  Wasnt it great?  The movie wasnt shot there at all, they just made a film trailer there for it.  Anyway  it was built in 1850 for Mary Udell and her four kids.  She was the widow of Mathew Udell, who was imprisoned for his role in the infamous (infamous in Markham) Markham Gang.  The house was sold to Abraham Hamilton in 1871, and was said to have added the front addition to it.  It began as a 1 1/2 story and was subsequently expanded to a 2 story at the end of the 19th century. 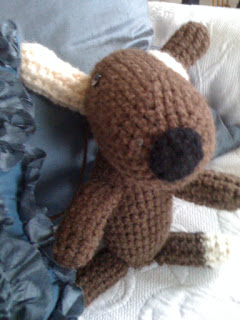 So now I thought I would show you the last of my amigurumi (spellcheck???) toys.  My kids are very excited, but are perplexed...they are also embaressed that at 8 1/2 and 9 1/2 they love stuffed toys.  I promised to keep their secret.

The dog is cute and quite large, but the boy bear isnt quite as nice as Maxine...  NO MORE AMIGURUMI for me!  Not until I finish piecing together that all demanding Afghan/bed spread for my daughter.  How can something so lovely instill so much dread into the pit of my stomach?  Everytime I see it sittting there so idly in my craft room (aka my daughter who now lives in San Francisco's room) it makes me cringe with guilt!  Ciao for now! 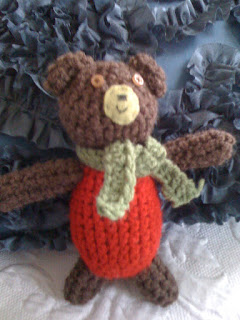