I've mentioned before that I am a certified tea sommelier, but I don't think I've ever mentioned that my dream was to start my own tea room.  Have you ever been to The Crown and Crumpet in San Francisco?  Isn't it just scrumptious?  Honestly, deeply Truly Scrumptious (huh, any Chitty Chitty Bang Bang fans out there?)!!  When my daughter lived in San Francisco, I visited her, and took her there for afternoon tea one day.  She humoured me by going there, but LOVED it!  She loved it so much that a couple of days later when we were going to go out for lunch, she asked if we could go there again.  She didn't have to twist my arm very far! 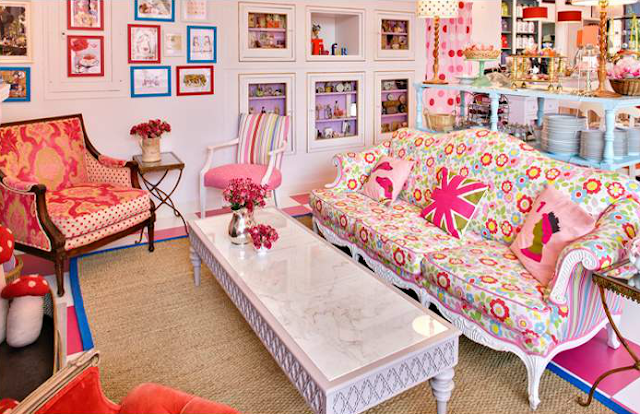 I'd seen the Tea Room in Romantic Homes magazine, just before it opened up.  I fell in LURV with the Cath Kidston covered sofa!  Look at the great cushions!  The Union Jack pillow was there WAY BEFORE it was hip in North America. 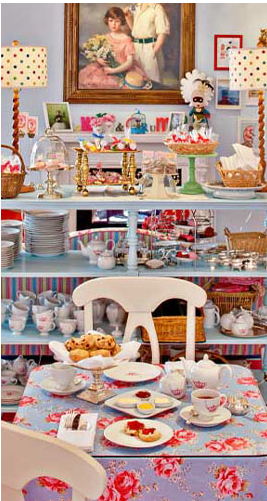 Its Cath Kidston EVERYTHING!!!  From table clothes to the aprons the wait staff wear.  Bliss… 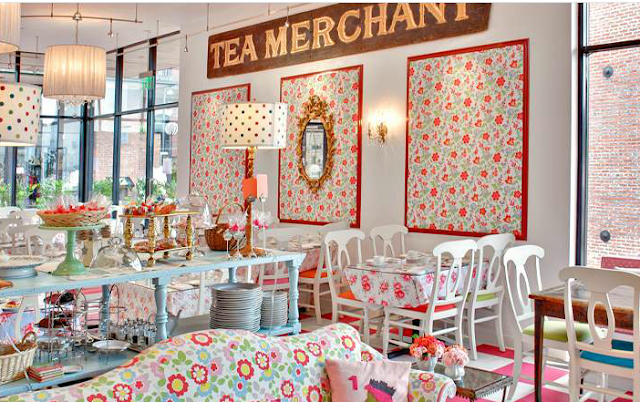 Don't you just LURV that Tea Merchant sign?  If Amy and Chris would sell it, believe me I'd be on it like melted butter on a crumpet! While it wasn't small, it wasn't big enough!  So they are apparently moving to a larger location!!!  Good news for Tea and Wit lovers!! 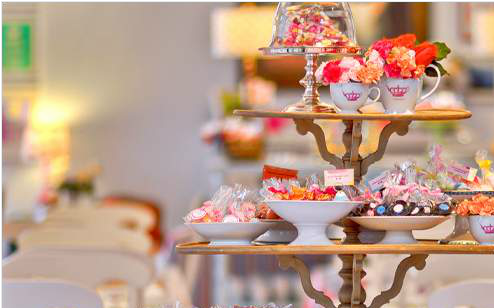 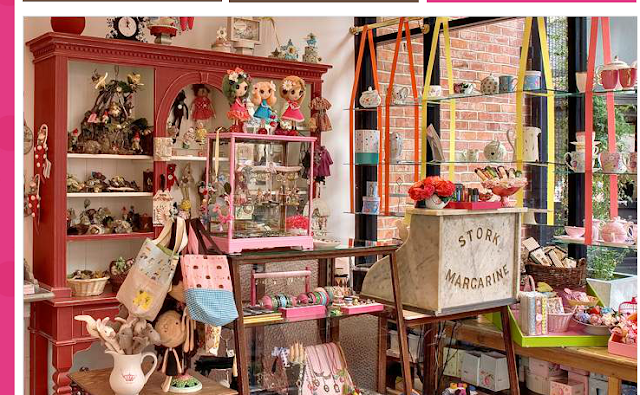 When you walk in there is an adorable shop!  Don't you just want it all??? If and when I go back to SF that will be the first place I eat (and drink tea of course!)!!

Subsequent to eating at the C & C my daughter introduced numerous friends to the amusingly charming tea room.  Then when she decided that she was going to leave SF and move back home, she quit her full time job, and got a job there for about a month bussing.  She just wanted a easy pleasant job so she could enjoy her last few days sight seeing.  She had a blast, and absolutely adored the owners.

Anyway, since I've become certified (not insane, just as a sommelier), I've been toying with the idea of opening up a tea room, but as I ran a family business for about twenty years, I'm both aware of the time drain it is, and financial drain.  It really isn't the time for me now, as I'm still busy raising my kids and taking them to all their lessons, auditions, etc…  My parents had sold their souls to the Entrepreneurial devil, and didn't have time to take us to anything, or to parent on more than a functional level.  My parents are and have always been wonderful, but they did what they had to do.  I don't want to do that. Since God has given me the strength and ability to give them more than I had, I'm going to.  When I had my three youngest kids, I promised myself that if I could, I would do for them all that my parents couldn't do for us.  Thus, no tea room yet!!

Anyways…even if I don't open a tea shop, Tea is a big part of my home!!!  My home is fully kitted out in Cath Kidston anyway, and WAY BEFORE I went to the C&C!!!  My husband is from the UK and I  would always bring it back whenever I or we went.  Since I started my tea sommelier program at George Brown College, I started collecting Tea Accessories.  I thought I would show some of my tea cup collection…Just so you know this is just a smattering of my collection.  I think I started collecting tea cups before I was interested in tea, just as a inexpensive and pretty collection.  It was probably the first thing I collected.

Here is how I display some of my favourite cups! 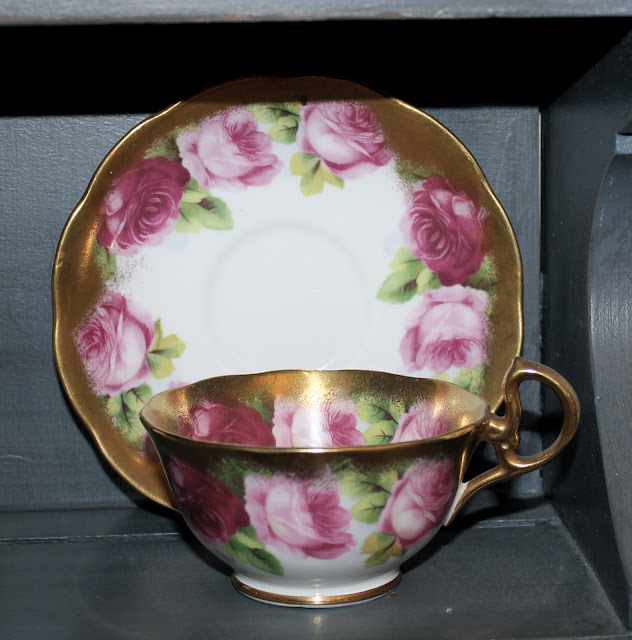 This ones one of my faves! 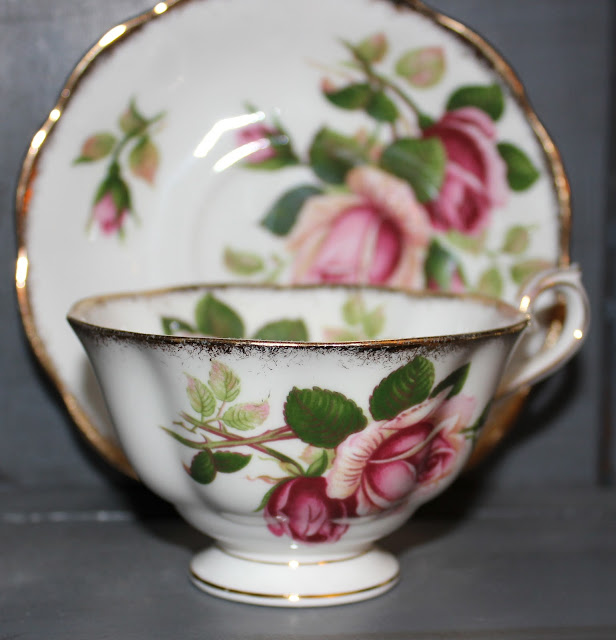 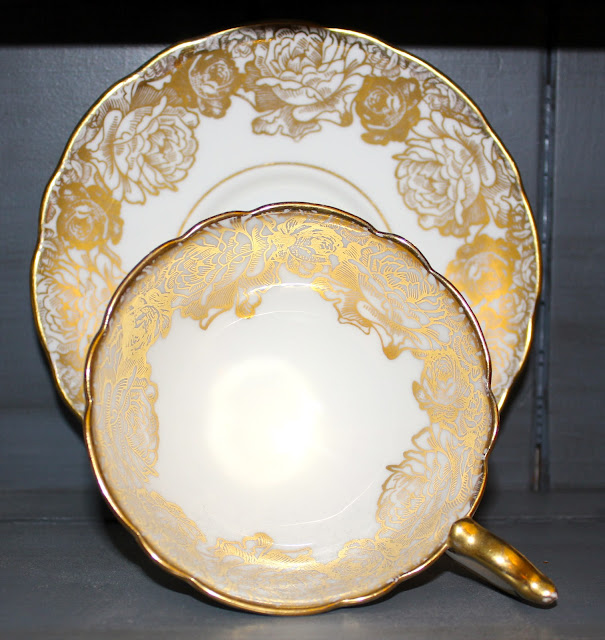 When I buy tea cups, its not their lineage which intrigues me, rather if I like it or think its unique, its in my buggy!! 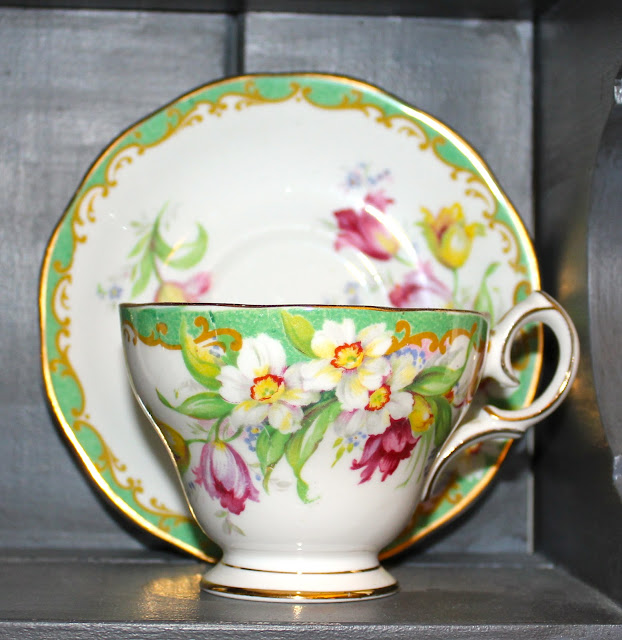 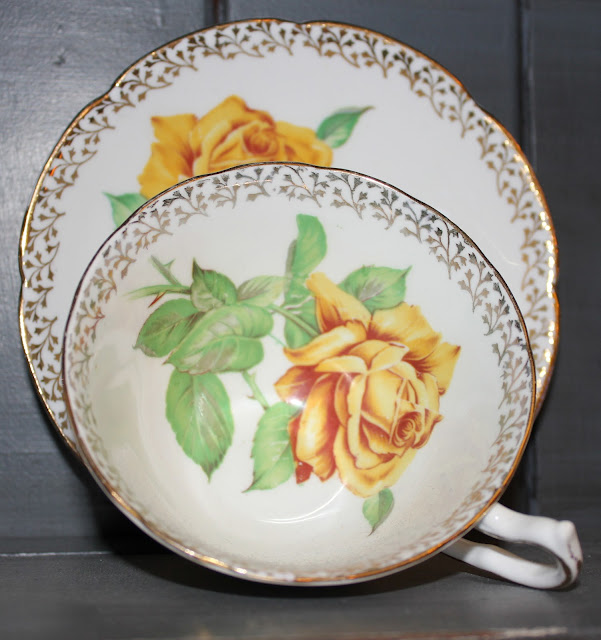 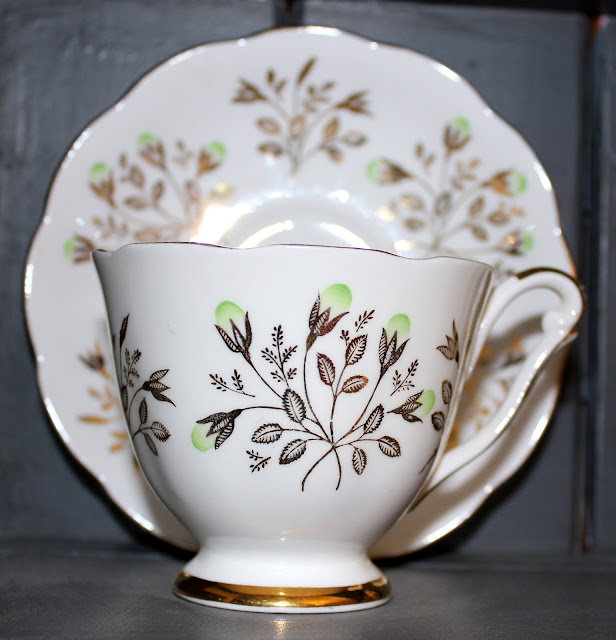 This ones so simple yet sweet, isn't it? 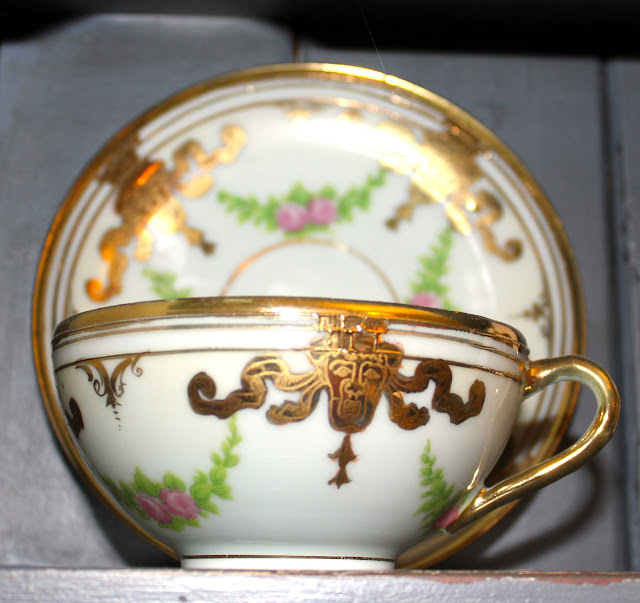 Ok, I lied, I'll buy limoge whenever I see it, cause its always the best, or is Paragon the best…Both are my absolute faves! 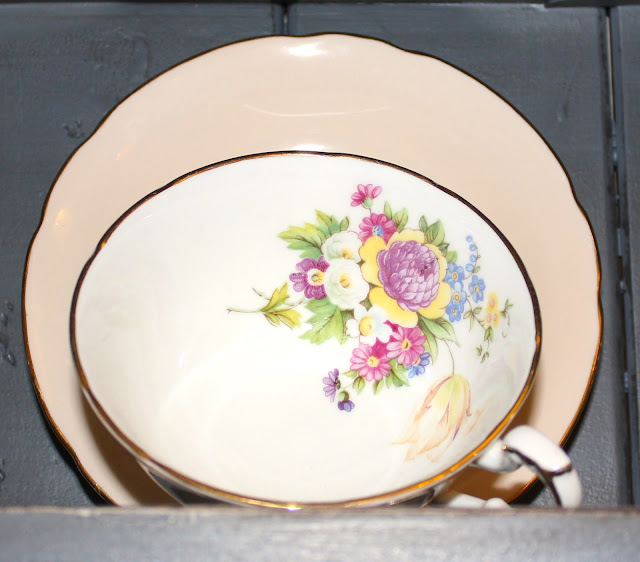 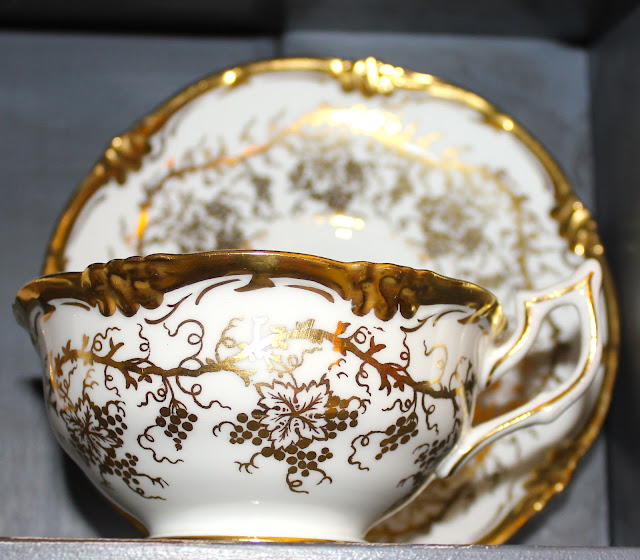 They are all in a small $5 wooden shelf I bought from the Sally Ann about ten years ago, and painted grey.  I've only displayed all that it can hold : ( 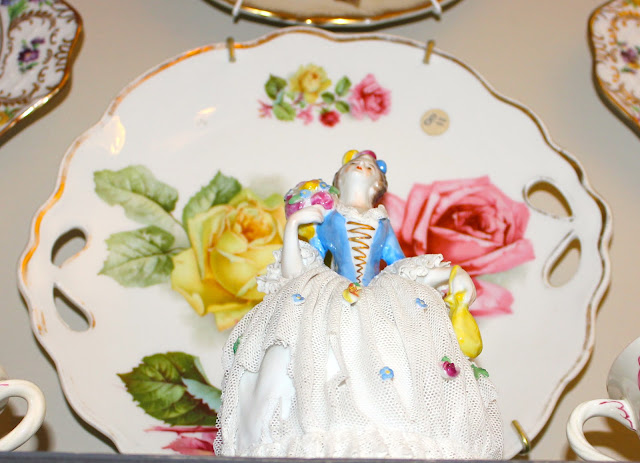 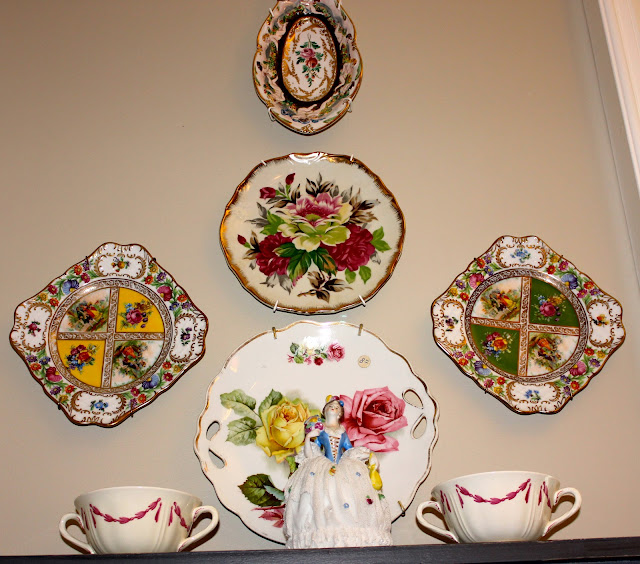 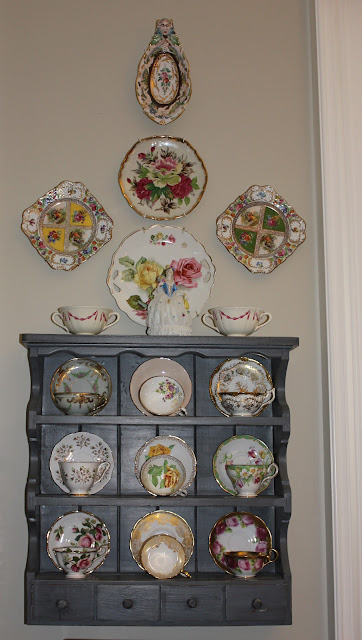 We use the tea trolly for a computer table for the kids computer.  No computer in their bedrooms!! 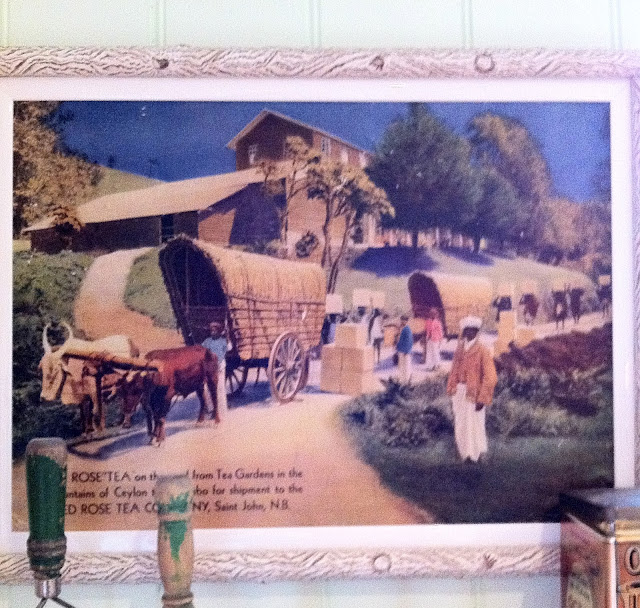 This is a very old original Canadian Red Rose Tea advertisement which I had framed. 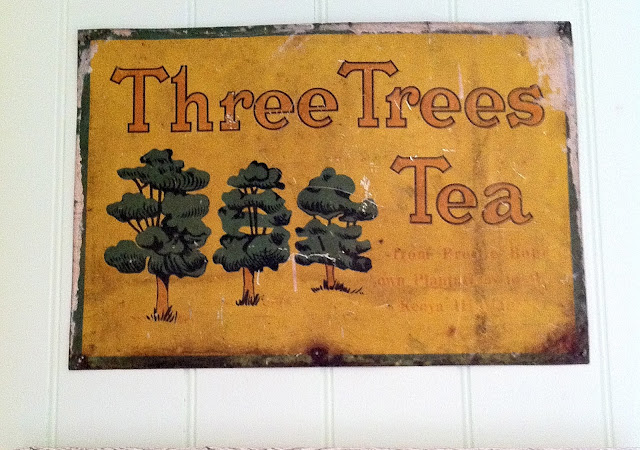 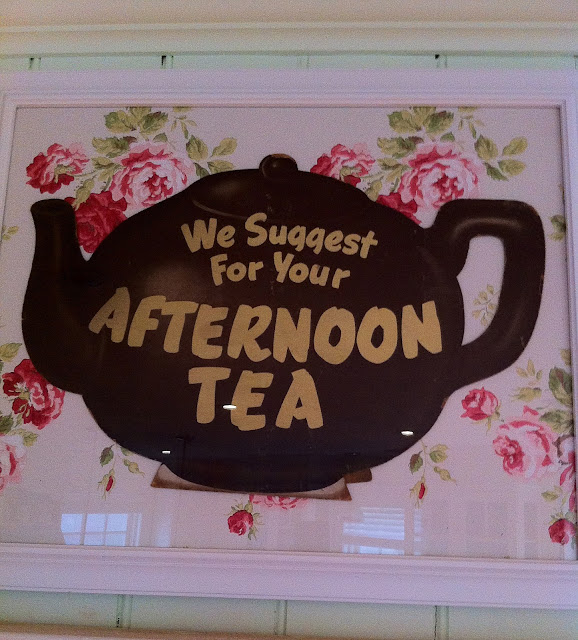 This is a very vintage British table top tea shop sign which I bought from the same gentleman who sold me the Red Rose sign, and the Three teas sign.  Aren't they great!!  Its funny how the Vintiqueing Gods work…I went to a small bungalow in midtown Toronto for a craigslist ad I saw for a vintage plastic kitchen canister set and matching bread box.  I don't need it and have no room for it (its stored in my basement waiting for a good display space) but loved it and NEEDED IT!!!  When I got chatting to the gentleman selling it, I told him I was a tea sommelier, and he told me he was moving into a hospice.   He was selling years of collecting.  He and his partner used to go antiquing in the UK regularly and would have no room in his new home.  He pulled out all his tea stuff and sold it to me at great (G R E A T) prices!!!  I think he made up the difference in the canister set! 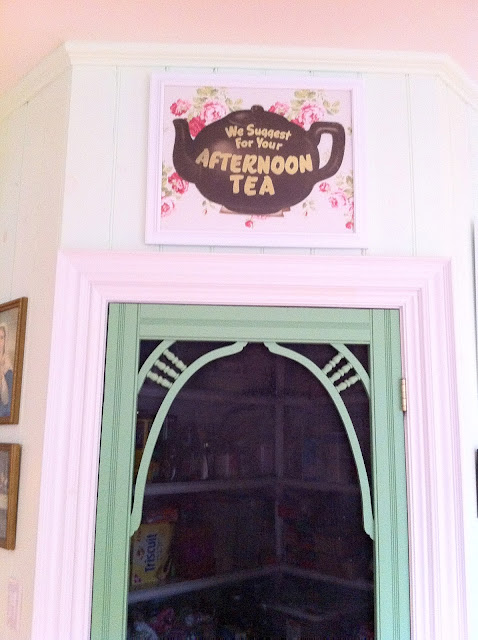 This hangs over my messy pantry door, thats why the lights are off, so you can't see the mess!

If I ever get that tea room, do I have the stuff for it!  Did I mention it would be a Peanut/tree nut free tea room?  You wouldn't know it was peanut/tree nut free because everything would be yummy!  It would be an eatery which had no nuts on the premises, and which only used ingredients which didn't contain traces of nuts!  I don't know if any of you have kids with anaphylaxis, but its really really hard to eat out.  Knowing that if the waitress ate a peanut butter sandwich at lunch then touched the cup that your kids juice comes in, he can die… Bummer!  Nut allergies kids are especially deprived of fresh yummy baked goods and candy!  So my dream was to have a tea room which would accommodate such families!  I'll let you know if my dream ever comes true!!!

How do you display your tea cups? Do you do anything interesting with them?  I'd love to know!

Hope you had a great weekend!!

Sharing with these great blogs: