Well, we had some excitement around her last week. My 11 year old son was cast as one of the leads in a music video for an up and coming and extremely talented Canadian musician...I dont know if I can give away his name, or mention anything to do with the video or not, but here is a photo of my son on set.  All I can say, is he had an amazing time!  It was shot outdoors on one of the hotest days of the summer, but it was such a good experience for him, that he just didnt care.  His scenes wrapped up at 3 am but the crew was still on set with the singer and some of the other cast.  I can hardly wait till this is on the air on Much Music (the Canadian equivalent of MTV).

Although this musician is Canadian, he opened for Robin in North America and is playing in Prospect Park in Brooklyn in a couple of weeks!

Good Luck in your musical career, John (his real name...hee hee)!  He was definately a very polite and nice young man (dont I sound old!  Ugh!  I'm not really that old, I'm just a mother of four!!!). 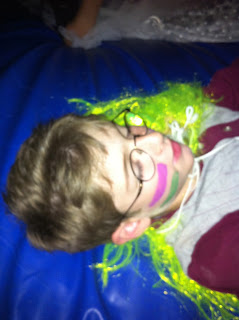 Here is Liam, all exhausted and covered in war paint at 2 am...resting until they call him for his next scene.  What a trooper!
Posted by Loretta Castorini at 7/26/2011