Oh What a busy weekend!

I cant believe its back to work again!  Where the XXXX did the weekend go?  Well, my 7 and 8 yr olds attend a drama class on 9 am every Saturday morning, and this was their last week, complete with a performance...unfortunately the performance was at 8 pm Saturday night, which isnt such a big deal, right?  Well, it wouldnt be, except that:
So we went to this performance and it was great.  The kids had written their play, and my kids have had no acting experience before, so my daughter (who takes absolutely nothing seriously) just had fun, and didnt care if she was supposed to 'put on a show' she just put on her show.  One of the kids in the class is actually on commercials, and is a well known face on Canadian television (his commercial was played nonstop the last few months).

Lucky you, no photos of the play!!!

Then on Sunday I decided to 'makeover' a thrift store stool which had been kicking around my basement, waiting for its prince to come, and he came in the form of a lavender can of spraypaint!!  Here are some 'before' of Cinderella... 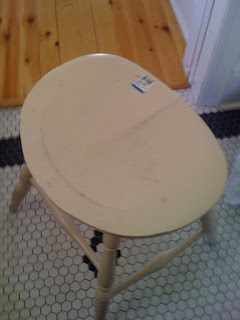 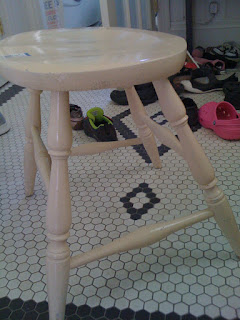 She had great bones, but a yucky coat of peachy paint (oil I think).  I began by spraying her white, but the under coat of paint didnt let the new paint cover it so well.  The peach just kept bleeding through, so I had to cover the mess with the lavender paint, which covered well, and was quite a nice happy colour.  This will be a step stool for my kitchen.  As usual, I forgot to take an 'after' photo of Cinderelli, so I'll have to post that next time, but you wont be disappointed, cause she couldnt get any worse.   Its like the Cosmo cover with Lady GaGa on it....Werent you all surprised at just how pretty she is under all that crap/costumery she puts on?  I mean, lets be honest, anything would be a pleasant improvement.  Just like Lady Gaga, my stool now looks surprisingly fresh and pretty!
Last but not least, I got my English loot today!!!  My husbands buddy went home to the UK last week and as usual I send a Cath Kidston shopping list with him (bare bones, and not to complicated list) and today he dropped off my goodies!!  I mean its not as good as going myself...which is such a sensory experience...a visual amusement park of goodies, but I am so grateful for his delivery!  Here are some photos, and remember these were taken on my iphone at my ugly grey work cubicle for a background, so imagine how b-e-a-u-t-i-f-u-l  they are in real life... 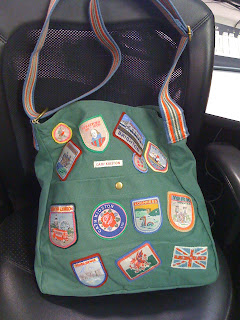 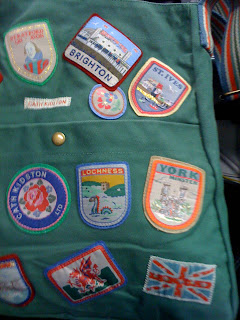 Is this the most lovely messinger bag you've ever seen???  I feel like I'm back in Brownies, with all my badges!!  Its has a nice substantial weight and feel to it too.  I'm very happy (until I convert the pounds to Cnd dollars!!).
The next item on my list was this lovely flour sifter 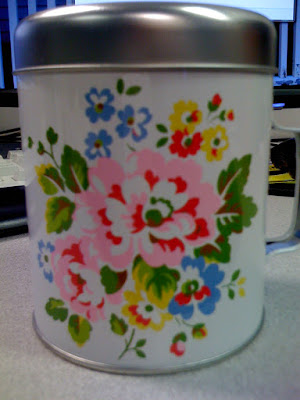 She's absolutely gorgeous and will have a very loving home!  I want to go to the UK myself!!  Why are all things British so damn amusing and loverly????  Damn those beautiful Brits!!!
Posted by Loretta Castorini at 4/12/2010